I know it can be an odd request but just take a moment to read and consider why I am so sick of my daughter being called “pretty”.

No, it’s not bad to be pretty, be called pretty, or call someone pretty but the word does make an impression and leaves behind a lesson in it’s tracks.

The lesson is, “Your looks matter most”.

You see, my daughter is called pretty constantly. Everywhere we go people stop her to tell her they like her looks. They mention her large blue eyes, her cute as a button little self, and her uniquely red hair. I’m sure many moms of girls experience this and it isn’t just mine but she just seems to attract attention everywhere we go. All these people have good intentions. Their hearts are in the right place. They think they are boosting her up, complimenting us, giving her a nice solid foundation of a self esteem. What they don’t always think about is that they are giving her a self esteem based purely off looks. Based purely on outward image. And being told 12 times per outing by strangers that you are visually appealing lets one know one thing- we judge others and ourselves on looks.

What do you think a 4yr old is going to take in? While health, intelligence, strength..ect.. is important- Pretty is what really counts and matters to others.

Not long ago we were at a park and my daughter paired up with an 8yr old girl and they quickly became playground buddies. At one point the girl told Eve that she looks just like the character Merida from the movie Brave. Eve’s response was this, “I really dont. My hair isnt the right red. and it’s not curly enough. and it’s not long enough.”

and the thing about this that really stood out to me was that Eve said this as if she fell short. She wasn’t “Merida enough” to really be told she was like Merida. And well.. she’s right… only the cartoon character Merida can be Merida and be exactly who Merida is. Eve is Eve… not Merida. But what happens when I translate that to her being called pretty? At what point does the same rational kick in that she already has when compared to a character?

But do I really compare to the standard of “pretty”?

While we may think we are building up her self esteem, I fear we are just building her up to feel meeting this standard is what matters and in the end- due to a culture with unrealistic expectations, anorexic models, photoshopped magazines, plastic surgery and professionally applied makeup that she will start seeing herself as falling short, like so so many of the females in the US who never feel good enough to really be pretty.

Instead of spending so much time calling her pretty, I wish people would stop her to compliment her taste in the books she picks out in the store. Or her energy. Or her wits. Compliment how smart she is after talking with her about science experiments or bugs. I know it comes more naturally to tell little girls they are pretty then it is to actually have to have a discussion with them and find their strengths but they are worth the time spent. If you talked to my daughter, you would know that she loves going hiking and that she goes running with her dad and that she (at only 4 1/2 yrs old and 28 lbs) has run a 5K in The Color Run. She is more than just red hair. She is a torch lighting the way for girls everywhere to be bold and strong and I never want her to think she is any less based on a scale of pretty. 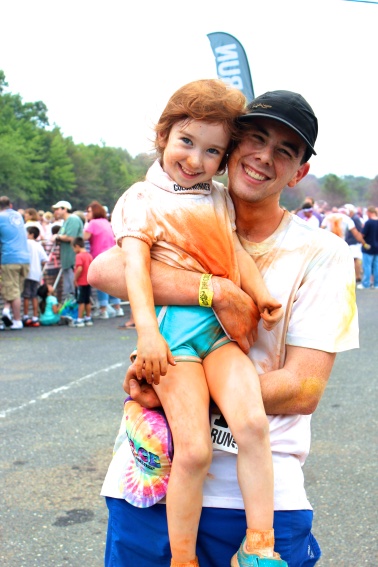 After running her first 5K with her dad